Back to the Land in the Ozarks

This guide highlights resources on the rural in-migration, or "Back to the Land" movements in Arkansas and the Ozarks available in the University of Arkansas Libraries and Special Collections.

"Back to the Land" in the Ozarks 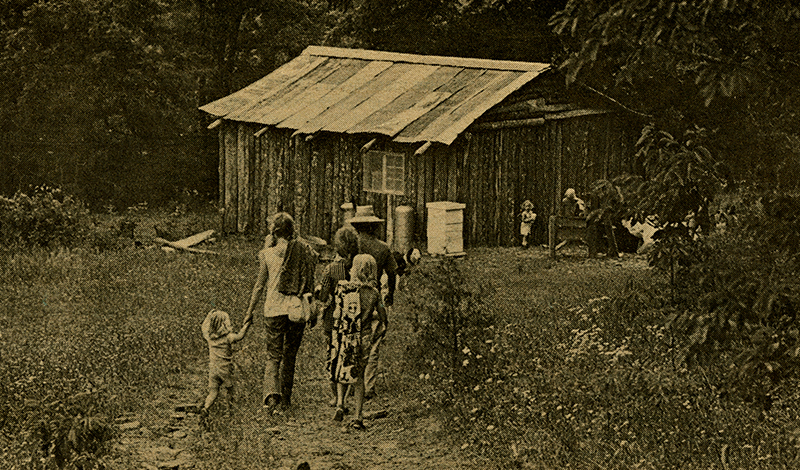 Image of "back to the landers" from the Ozark Access Catalog, 1973. Available in the University of Arkansas Libraries Arkansas Collection, 917.78705 Oz13.

This topic guide was curated in coordination with historian Jared Phillips (Ph.D., University of Arkansas). Phillips has extensively studied the “Back to the Land” Movement of the 1960s and 1970s, including the social and cultural forces that drew members of the American counter cultural and rural traditionalists to the Ozarks in pursuit of alternative lifestyles amidst the turmoil and activism of the period. Phillips’s scholarly article on the subject, “Hipbillies and Hillbillies: Back-to-the-Landers in the Arkansas Ozarks during the Seventies,” won the Lucille Westbrook Award for local history from the Arkansas Historical Association. A forthcoming full-length monograph is being published by the University of Arkansas Press.

Phillips contributed an overview of the history of the Ozark Back to the Land movement and a selection of the research materials he accessed through the University of Arkansas Libraries. In addition to the many oral histories and private collections Phillips collected over the course of his project, Phillips relied on archival and print sources in Special Collections for valuable primary material. This research guide is intended to facilitate future study of the complex historical topic of post-World War II America and Arkansas.

Introduction to the "Hipbillies and Hillbillies"

During the end of the 1960s and the early 1970s, a wave of nearly one million people throughout the country left urbanized areas for rural settings intent on establishing themselves as “back-to-the-landers.”  While many of these people moved to the Northeast or the West, which had long been centers of counter-cultural movements, a significant number of these intrepid young people left for the Arkansas Ozarks. There is no easy picture of the movement, but we can build a composite image of those that came to the Ozarks. It is almost impossible to state how many back-to-the-landers moved to Arkansas between 1968 and 1982. Rough estimates suggest that somewhere between two and six thousand people participated in the movement. Nearly all of the back-to-the-landers (BTL) who moved to the region were in their early to mid-twenties.

On the whole, the BTL folks were well educated. Over 70% had completed undergraduate degrees. Although some had already, many would later also obtain graduate degrees. Approximately 85 to 90% of the respondents came (or returned) from urban areas like New Orleans or Chicago, with a few from Fayetteville or Little Rock heading to the hills.

What drew all these people to the region, a place often typified by the hillbilly image? People like Edd Jeffords, a returnee to the state, sometime member of the BTL movement, and founder of the Ozark Institute, argued that better roads, industry relocation, college and school growth, and development of retiree communities have all helped bring people to rural areas. These things worked alongside longstanding urban concerns about crime, pollution, and crowding to draw people to Arkansas. These factors were easily seen by potential in-migrants in population density—even by 1980, population per mile in Arkansas was 43.9 people, much lower than the national average of 64 people per mile. These things, plus land prices, were significant motivators for many in the back to the land community. Indeed, many moved to the Ozarks in the 1970s simply because prices were so favorable; one could purchase nearly ninety acres with a year-round spring for less than $20,000 (although often BTL groups did not purchase such land). In general, this impulse to move was founded on a discomfit with prevailing society. A desire to create a just world with meaningful human contact pervaded the Ozark BTL movement.

The legacy of the BTL movement is still felt throughout the region. Those still on the land and those who would come off the land have helped to create lasting change—a deep revolution. Indeed, a uniting factor across the BTL community was the desire to create a true, lasting revolution, beginning at the individual level and spiraling outward into society at large. As a result, the community has served to inspire a new generation of back-to-the-landers in Arkansas, many of which have learned from the mistakes of their predecessors and are focused on sustainable strategies for rural development, small farm economies, and community education programs. Although this new generation of pioneers is attempting to head into homesteading with their eyes wide open, they are no less enthusiastic about ideas of social change starting in the community, which they, like the generation of the 1970s, identify as the key for lasting revolution.