Yellow claiming flags are placed in newly checked in issues to denote that that particular issue has been claimed. The flag serves as an alert that the claim slip needs to be pulled and the check in record needs maintenance.

Yellow Claiming Flags at Check in:

During check-in two instances arise in which you will need to use a yellow claiming flag: when a regular claimed issue has arrived or when a flawless copy or replacement has arrived. The procedures for each are outlined below. 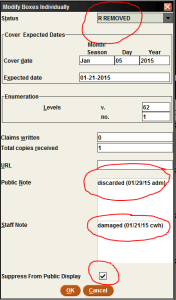 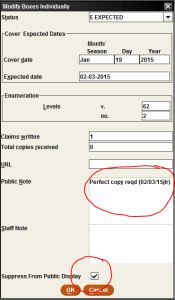 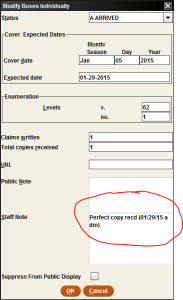 Processing a Yellow Flagged Item from the Claim/Errata Shelf

Journals that have been flagged with a yellow flag should be set on the claims side of the errata/claims shelf. From here, a serials worker (often a student worker) will obtain the flagged journal and pull the claim slip from the claiming drawers located on the far end of the claiming agent's desk. The claims are filed alphabetically by title. (For more information about filing procedures, see the filing guidelines). Obtain the correct claim slip, making sure it matches the journal received in title and volume and issue number. Once verified, mark Rec'd (D/I) on the claiming slip and place the slip in the Skipped Issues/Claim Slip section of the claiming agent's desk. A student employee (or other serials staff) will then use this slip to remove any unnecessary claiming notes in the check in record and resolve the claim. 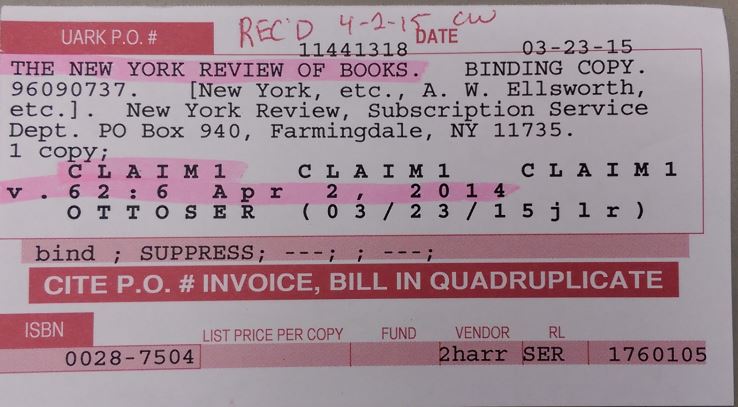