Getting Better Results with Web of Science

A guide to Web of Science and some of its features.

As you can see in the image, a JCR report by the subject of journals shows which ones are indexed, what their citation metrics are in the database, and other numbers such as immediacy index. This is the top of the list for Agronomy--  you'd have to scroll on the real page to see more titles. When you click on the individual title, you can see more information about that particular journal, including things like trends in their impact factor over time. 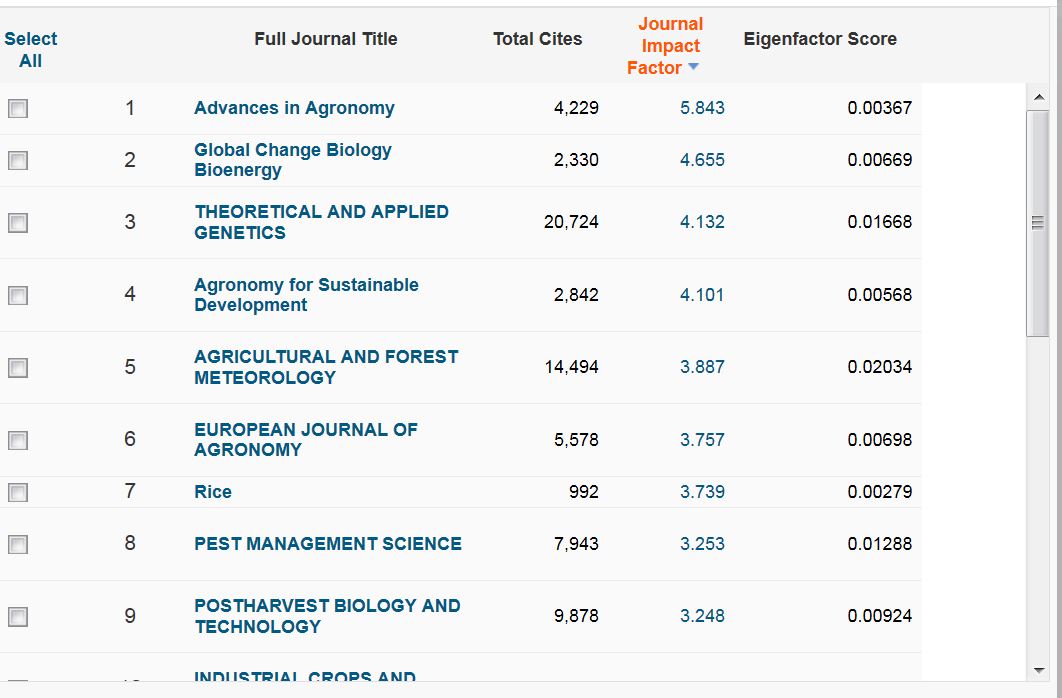 Impact factors are a proprietary measure or metric based on the number of articles that have been published in a journal in two years, divided by the number of articles that have been cited from the journal in those years. They use the citations that show from journals indexed by Web of Science and companion databases, not the whole universe of publications. The impact factors of journals are sometimes used as a shorthand to measure someone's scholarship, but that is too simplistic.

The Eigenfactor score or Eigenfactor is based both on what has been cited from the journal in the last five years (starting from the base year of 2007) but also factors in whether the journal that is citing an item is itself well-rated or considered prestigious.

"The Eigenfactor Score calculation is based on the number of times articles from the journal published in the past five years have been cited in the JCR year, but it also considers which journals have contributed these citations so that highly cited journals will influence the network more than lesser cited journals.  References from one article in a journal to another article from the same journal are removed, so that Eigenfactor Scores are not influenced by journal self-citation. "

H-index, defined by J. E. Hirsch, its developer, is:

"....the index h, defined as the number of papers with citation number (symbol, greater than or equal to)h, as a useful index to characterize the scientific output of a researcher." (Hirsh, PNAS, 2005) http://sci2s.ugr.es/hindex/pdf/Hirsch2005.pdf . That is, a particular researcher has an h-index of 12, if they have published 12 articles which have been cited at least 12 times.

The Metrics Will Evolve....

Journal Citation Reports-- What Do They Do For Me?

The Journal Citation Reports (JCR) provide a number of pieces of information. They show which journals are being indexed in Web of Science and some of its companion databases; they show impact factors for the journals that they index, and in effect rank the journals in a discipline, and they show h-index and Eigenfactor numbers for the journals.

Impact factors and Eigenfactors are both based on the citation information in this product. Therefore, they enjoy support but also entail some problems, because Web of Science et al. are not indexing universally, nor do they cover a lot of fields in much depth. Social Work, as one example, only has forty titles represented, and some fields have fewer.